Negotiating Your Success: Do Your Suppliers Finally Have a Voice? 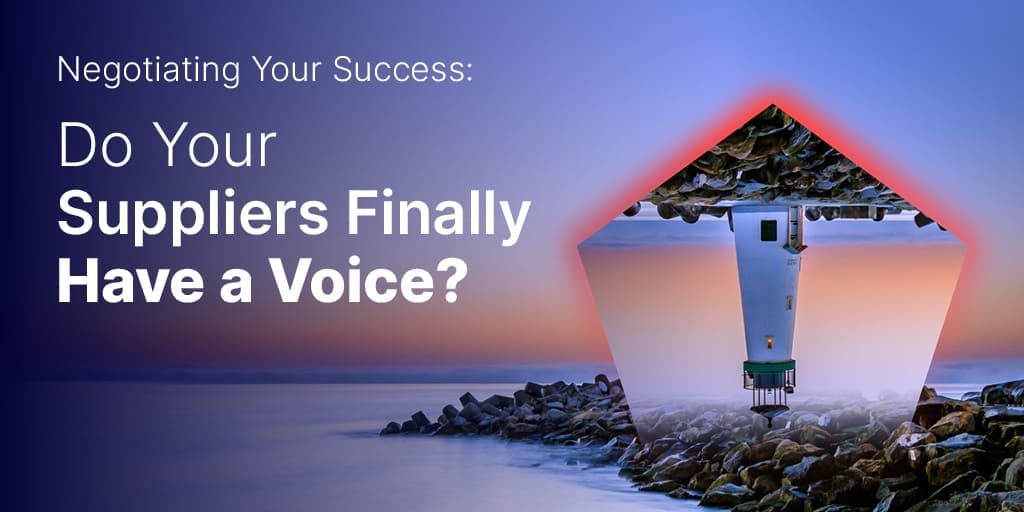 Ahead of the launch of HICX’s own Voice of the Supplier Survey, in which we asked 500+ large and international suppliers dealing with enterprise customers in the CPG, FMCG, Aerospace Defense and Energy sectors about their experience serving some of the biggest organizations in the world (i.e., those with a revenue of $1 billion or more), we held a webinar to find out if suppliers are being heard.

The changing nature of buyer-supplier relationships

As she works with smaller and medium-sized suppliers, Corinne kicked off a discussion about how these organizations feel towards their customers. What she’s hearing in the industry is that there is a one-sided buyer-supplier relationship, with suppliers rarely being able to contribute towards changes and circumstances.

“We increasingly do hear about circumstances where smaller businesses feel that it’s an unlevel playing field. What many of them want is really just to understand what the rules are, and that everybody’s going by the rules, and that when they sign a contract or a deal or an agreement with a buyer, that that’s going to be abided by,” she adds.

Following on that point, Peter wonders if the reason for this uneven dynamic is power. He quotes a book by Andrew Cox, an academic from Birmingham University, who claims, “most relationships are defined by where the power lies and that actually procurement strategies should be based on the power dynamics.”

Particularly for smaller suppliers, they are in an unfortunate situation as it is harder to get a hold of some of that power when they rely on their repeat and large customers. However, if the power levels change at some point, such as during scarce supply periods, it is time for buying organizations to be prepared and try to improve collaboration with their suppliers.

Ragnar spoke about the supplier-buyer power dynamic on a macro level. He explained that in the 1970s suppliers were ‘in charge’, as Procurement processes weren’t well developed. However, in the last few decades there has been a significant rise in the development of procurement technologies which has elevated and matured the function and changed the power dynamics.

This is now changing again, with suppliers being in favorable positions due to significant events such as COVID-19 and supply chain shortages. Suppliers are now increasingly gaining more power and actively prioritizing their customers-of-choice.

Ragnar believes the answer is to balance this out and have a two-way buyer-supplier relationship between equals. The way forward is to stop focusing on cost-savings and find new ways to measure value.

He appreciates that change is already underway. “I’m quite positive around Procurement’s progress, and because we are seeing companies launching supplier experience driven transformations, now they are thinking ‘How do we become customer of choice?’, ‘How do we make it easier for suppliers to work with us?’. They’re trying to institutionalize it in the sense that they are not only thinking about the one top supplier anymore, they’re thinking about the whole ecosystem,” says Ragnar.

According to Ragnar, mature companies are increasingly looking to establish cooperative environments as the world is moving to a network-based type of model. “Companies are thinking, ‘We need to build the value chain and orchestrate an ecosystem – where the whole ecosystem is starting to collaborate and where local companies are thinking that innovation and collaboration is not going to just be with your tier one [suppliers].’ It’s going to be with a big subset of organizations and the increasing innovation is assumed to be coming from smaller organizations,” he believes.

As the supplier-buyer dynamic continues to change, Rangar also says that supplier marketing will become increasingly popular, as companies will adopt some of the consumer marketing practices. “Supplier marketing will probably become the topic of the future where you start to position yourself around, ‘Hey, look at how great we are, look at the great service we have, look at the customer feedback from my suppliers, look at our innovation programme’, and really start to pick up,” he is certain.

COVID-19 has had a big impact on a number of factors, one of them being the permanent shift in direction and thinking towards that collaborative effort. As supply was scarce, businesses had to be creative in order to become a customer-of-choice for their suppliers. However, Peter states that just treating suppliers ethically is a step-up in itself.

Aside from the most strategic suppliers, Peter claims, “You need to treat the rest of your supplies at least in a way that is ethical, that is as seamless as possible for them, that doing business with you, is not a huge pain in the backside. If you can do all that, you’re doing better than most of your competitors in terms of dealing with suppliers. Even if your touch points are relatively infrequent, if they do come up with something at least you’re in a better position, then they’ll come to you.”

Jon provided an example in which Facebook fronted the cash to cover suppliers’ running costs when other customers were not paying on time. Corinne comments that this sort of treatment creates very loyal suppliers who are eager to help out later on.

“If you pay on time, and on top of that you’re offering to help out in other ways, that can be gold. During the pandemic so many smaller companies had to shut down. They just didn’t have the cash flow. Having a buyer who’s willing to not only pay you but also help you deal with your other costs is going to be absolutely huge,” she adds.

Under these new collaborative models, the metrics of success come up as a big question mark. How do we measure success now? According to Ragnar, the answer is in treating the supply base as an asset.

“Make sure that you are consistent, efficient and transparent in what I would refer to the more operational type of activities. You pay on time, you provide visibility on payment, you’re fair, you’re ethical, onboarding is a breeze, and it’s easy to navigate the tools you’re having. All these types of seemingly basic things but which cause huge friction points in the supply relationship today,” he claims.

This type of treatment of suppliers is likely to enhance supplier collaboration, make Procurement more efficient and bring in various types of innovation. As a result, suppliers will be more likely to participate in various programs, such as ESG and diversity initiatives. These are all various goals which can be measured and tracked.

Within the volatile and unpredictable business landscape, agility and flexibility from both suppliers and buyers is extremely important. From the conversations she’s had, Corinne believes small and medium sized suppliers are happy to operate in that kind of environment, so long as there is standardization, and the rules are fair for everyone.

They are also more likely to be flexible, agile, and innovative if taken care of. “The nice thing about many of them is that they can sometimes more quickly respond to changes that may be coming from those larger buyers. I think that that will be absolutely something that a lot of smaller suppliers would be very open to being a part of because they want to be given more opportunity, and it also forces them to be more innovative. But again, it has to be in an environment where they feel like they’re going to be okay,” she claims.

Can existing technologies support this evolution?

From a technological standpoint, Ragnar identifies what is needed to successfully implement these programs for improving supplier experience. He believes certain solutions should have a specific use case and a problem to solve, rather than simply investing in technology for the sake of having it.

Data is an ongoing challenge, and having a single-entry point for all data enables a centralized view. “These are massive transformations, it is not done overnight but it’s definitely possible. I don’t want to talk too much about what we necessarily do here, but we are proving that it is absolutely possible to centralise the data, to create a single interface, to connect the systems and start to orchestrate, and make life easier for the supplier,” he concludes.

To find out more about the results of the Voice of the Supplier Survey and how to alleviate suppliers’ friction points, download the report here.

61% of suppliers struggle to do their best for big brands

Infographic: The Voice of the Supplier Survey

This infographic provides a quick summary of the key findings from our recent Voice of the Supplier Survey 2022. The way in which we work with suppliers has to change. Recent events have shown that ‘supplier experience’ is behind other areas, such as customer experience (CX) and employee experience – and this can be damaging […]

The Voice of the Supplier Survey

Why Is Supplier Experience Now Such a Key Priority?

The era of Supplier Experience is here Accelerated by recent global events and propelled by today’s need to fundamentally change the way in which organizations interact with their suppliers, there is a realization in the industry that the enterprise-supplier relationship cannot be treated as a zero-sum game. Suppliers as an extension of the organization Instead, […]

How does Supplier Experience Management create a win-win for both customers and suppliers?

The last years have seen a fundamental and permanent shift in supply chain relationships and leading organizations recognize that their future growth relies on the strength of their supplier base. Supplier Experience Management (SXM) is the practice of creating the conditions in which a buying organization and all of its suppliers can achieve mutual success […]

Driven by events at the beginning of the decade, Procurement’s mandate has continued to expand rapidly, as the shift from cost savings to value creation and collaboration gathers pace. Establishing true partnerships has brought the subjects of supplier centricity and customer-of-choice sharply into focus. Being supplier centric means not treating suppliers as a commodity but […]

The turbulent events of 2020 and 2021 have brought the world to a virtual standstill and with it a realization of just how dependent organizations are on their supplier communities. Companies have reacted by starting to shift their focus towards collaboration, establishing true partnerships and driving value for all stakeholders, rather than simply thinking about […]

What is Supplier Onboarding?

Supplier onboarding is the process of collecting the information and data required to set up an organization as an approved supplier or vendor. This procedure aims to enable your company to conduct business, purchase goods and services and pay the supplier efficiently. Supplier onboarding also requires vetting and validation to ensure the prospective supplier complies […]

What Is Supplier Management and Why Is It Important?

What is Supplier Management? Supplier management is identifying, qualifying, acquiring, onboarding and managing suppliers who are essential for the operation of a business and its products and services. Its core objective is to ensure that all contracts with suppliers are in place to support each aspect of the organization to put it in the best […]

Supplier Experience Management The Benefits of Best-of-Breed Solutions Considering the Suppliers’ Perspective
We use cookies on this site to enhance your user experience. By continuing to use this site, you are agreeing to the use of cookies. To learn more, see our Privacy Policy.OkPrivacy policy