Why Today’s Organisations Must Embrace Change In Order To Survive 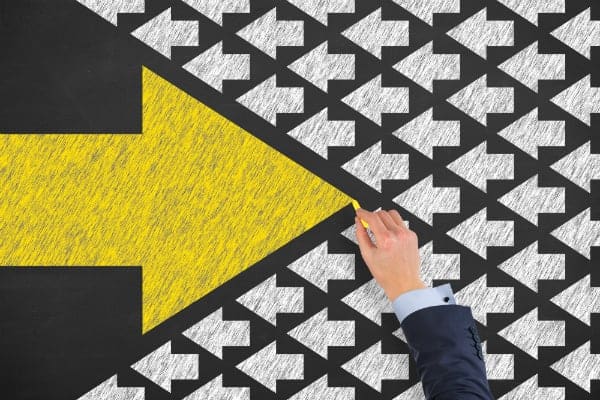 In many ways the chart below tells its own story. But let’s take a deeper dive into it.

As you can see, the last ten or so years have seen dramatic change in the corporate world.

There has been a shift away from the ‘traditional’ players at the top of the tree, to domination from tech companies.

Whereas in 2008 there were only two tech companies in the top ten (not including AT&T which is telecoms) and none at the top, ten years later that picture had changed significantly with five tech companies moving to the top at the expense of the likes of Walmart, Chevron and P&G.

Apple, Google, Microsoft, Amazon, Facebook. According to Forbes, these five tech behemoths were the world’s most valuable brands in 2020. Which is quite staggering when you consider that two of these companies didn’t even exist a quarter of a century ago.

What does this tell us about the modern world? Well, firstly it tells us that we have an insatiable appetite for all things digital and technological, given the way that these companies have grown so quickly over the last couple of decades.

Secondly, it is also a clear testament to the fact that we are currently in the midst of a digital revolution.

The new industrial and digital revolution

Talking about an ‘industrial revolution’ may bring to mind images of the factories and cotton mills that dominated the ‘first’ revolution – the mechanised revolution of the late 1700/early 1800s – but the term now means a lot more than that.

In fact, as this joint report by The University of Melbourne and CIPS says, “The industrial revolutions can be characterized by four distinct phases of maturity and emphasis. These are mechanization (Industry 1.0), electrical (Industry 2.0), computerization (Industry 3.0) and now phase 4 is digitalisation (Industry 4.0). Firms are now starting to move beyond Industry 3.0 (an era of computer and the Internet) toward a more fully digitalised environment, referred to as Industry 4.0.”

The interesting thing, however, is that this time the revolution seems slightly different in nature to those that have come before. There are certain factors that set it apart which we’ll look at below.

The age of creative destruction

It’s possible to argue that we now live in an age of constant ‘creative destruction’, which is a term coined by Austrian economist Joseph Schumpeter to describe “the way technological progress improves the lives of many, but only at the expense of a smaller few”.

This is an effect that’s been felt as a result of every industrial or technological revolution in which new machinery or more efficient processes have enabled greater production, usually at the expense of companies that failed to change.

It’s also possible that the rate of creative destruction may actually increase throughout all sectors, as digital processes and technology become increasingly woven into all day-to-day tasks.

Living in the midst of constant change

Clearly, there’s a very profound difference between industrial machines being used to make manufacturing more productive (but which still need human input throughout), and automation software being used to completely run processes on a large scale without the need for input (or at least only minimal input in order to build processes and workflows).

It goes without saying that there’s a big difference between looking at a period of change and examples of change in a historical context, and actually living through change.

>>> More from the HICX blog: Building Software In-house: Is It A Good Idea? (Build vs Buy)

We can look back at the ‘original’ industrial revolution, or industry 1.0 as it was called earlier by The University of Melbourne and CIPS, and see who the winners and losers were, but that’s with the gift of hindsight. It’s harder to recognise and adapt to change while you’re actually living through it.

For example, recent history is littered with examples of companies that failed to adapt in the face of new technology. That’s not to say that every organisation that fails to change will be wiped out, but they do stand to lose a lot of ground to their competitors. They key is to identify and take the (right) opportunities when they come along.

Do or die: companies that thrived

If you owned a mobile phone in the late 1990s or early 2000s, it’s pretty likely that you had either a Nokia or a BlackBerry. They were the major players in the mobile phone market over that period of time, but were reluctant to adapt either their hardware or software to meet changing consumer demands or fight off the competition.

That left the door open for others to enter the fray, and when Apple launched the iPhone in 2007 and changed the market from simply being about mobile phones to smartphones, that spelled the end of Nokia and BlackBerry’s dominance. Both companies still exist, but are nowhere near as big as they could have been.

Another famous example is that of the video-rental company Blockbuster, which hit its peak in the mid-2000s but was redundant a few years later. The company failed to recognise the huge potential of the online world and digital streaming services, instead choosing to stick to physical stores.

Perhaps the worst thing from Blockbuster’s point of view is that they had the chance to buy Netflix at one point, but declined. Netflix went on to pivot dramatically to streaming.

There are plenty of instances such as those just mentioned of companies refusing to see the value of change or ignoring the potential of new technology and data, and we’re likely to see many more in the coming years.

While these examples are interesting, why are they relevant?

Apple entered an existing market with a brand-new type of product – it didn’t just copy what the others were doing. Instead the company adopted a different strategy. Netflix recognised that the future of media (or at least a significant chunk of it) would be based around online services and streaming, and so followed a different strategy compared to its rivals.

It is this area of strategic and operational change that we are most interested in.

One of the reasons why so many companies are struggling is because they’re still clinging to the idea that old processes can easily be retrofitted with new software, but that’s simply not the case. Software alone will not suddenly turn you from being a BlackBerry to being an Apple. It’s only ever part of the solution.

If the examples above show us anything, it’s that businesses must be truly willing to adapt and embrace the benefits offered by flexibility and new technology – that means flexible thinking, as well as ‘flexibility’ in terms of building digital infrastructures that can cope with change.

Think of a rusty old car that’s fallen into disrepair. You may be able to fix the chassis and give it a coat of paint, but ultimately nothing fundamental has changed – it’s still the same car underneath, and any operational problems it had still exist. Businesses must be willing to change their processes at the same time as adopting new technology.

This piece by McKinsey makes some valuable points about what kind of mindset companies need to adopt (regarding transformation) in order to enable change.

For example, it states that companies need to go beyond merely automating existing processes and believing that that is enough.

“They must reinvent the entire business process, including cutting the number of steps required, reducing the number of documents, developing automated decision making, and dealing with regulatory and fraud issues. Operating models, skills, organizational structures, and roles need to be redesigned to match the reinvented processes.”

That’s not to say that the push for digitisation means past experience should be forgotten. Indeed, the piece goes on to say that “digitization often requires that old wisdom be combined with new skills”.

Of course, change is hard and can take years to achieve. Many organisations might feel that they either don’t have the time required to do it properly, or have been stung before by failed IT initiatives. Even if that has happened, however, it’s not a good reason to stop trying.

One thing that springs to mind is Henry Ford’s famous quote: “Stopping advertising to save money is like stopping your watch to save time.”

Except in this case it should be edited slightly to read: “Stopping digital transformation to save money is like stopping your watch to save time.”

Out with the old?

Speaking of mindset, it begs the question – what was it, or is it, that made the tech giants mentioned earlier different to all of the other companies? Why have they succeeded to such a huge degree where others have failed?

We’ve seen how – over the last few years – it’s been a case of out with the old, in with the new. The big beasts that were established in the 1800s have been replaced at the top by companies that are, by comparison, still ‘startups’, having only emerged in the last 20 or so years.

How much of this is to do with mindset, as well as luck? They adopted the right mentality that helped them to thrive at the start of the burgeoning digital / technological revolution. The kind of mentality that can be summed up with Mark Zuckerberg’s famous phrase: “Move fast and break things. Unless you are breaking stuff, you are not moving fast enough.”

This may not be the exact mantra adopted by all such companies, but it still speaks volumes about the kind of mentality that helped the likes of Facebook, Google and Amazon not only succeed, but achieve huge growth.

This focus on moving quickly and being willing to fail short-term if it ultimately leads to long-term success can’t be achieved with old, cumbersome processes and heavy bureaucracy.

Apple took risks on new products like the iPhone and ended up crushing the competition. Netflix focused on digital services while Blockbuster didn’t. They analysed the information they had access to and made intelligent decisions based on it. If you happen to ‘break’ something, take a step back and try again until you get it right.

If big, established companies don’t want to become victims of the digital revolution that we are all living through, or be outpaced by rivals who are willing to fully embrace digital transformation, they must also be prepared to change and change quickly and efficiently.

This blog was originally published in August 2019, and updated in March 2020

There is no better time for leading organizations to pioneer change in sustainability.

The Spend Matters Q3 Solution Map is out and we probably need to update our answers with the largest companies in the sector, Ariba, Ivalua and Jaggaer making gains. That said we are still holding our own and will be looking to counter punch (so to speak) in 2019. Being one of the smaller providers […]

Driven by events at the beginning of the decade, Procurement’s mandate has continued to expand rapidly, as the shift from cost savings to value creation and collaboration gathers pace. Establishing true partnerships has brought the subjects of supplier centricity and customer-of-choice sharply into focus. Being supplier centric means not treating suppliers as a commodity but […]