Solving the Procurement Data Dilemma: How to use procurement data to avoid failure and fraud 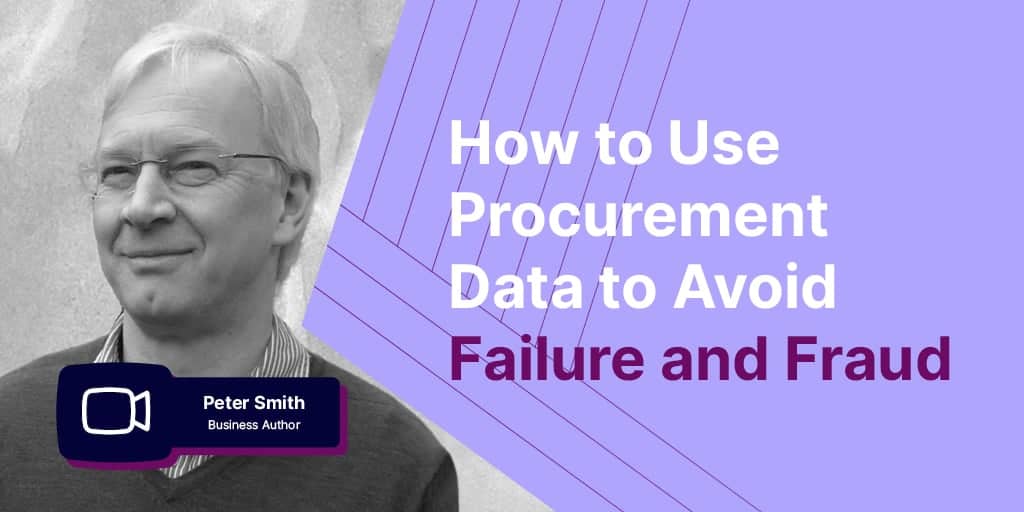 In the first of a series of three interviews on ‘Solving the Procurement Data Dilemma,’ and to support a full survey carried out by HICX and Raconteur on the subject, Gren Manuel speaks to Peter Smith, who has spent eight years as Managing Editor of Spend Matters Europe, Europe’s leading procurement and supply chain web site, to gain his views.

How to use procurement data – Understanding your suppliers

Peter describes this step as foundational for good procurement performance, citing it as the pillar of being able to avoid “failure, fraud and ‘f*ck ups,’” which forms the basis of his upcoming book on how organizations are wasting billions, with much of it being driven by data malpractice and its link to Procurement in some way. As Peter explains about the link to Procurement, “It’s not surprising because that’s where money flows. You get fraud and you get corruption where there is money that can be extracted.”

In the interview, Peter provides one example of a large global company, headquartered in Europe, which lost through fraud the sum equivalent to an entire year’s revenue in an Asian country, adding, “A lot of that, frankly, comes down to poor data management practices and processes; and not keeping on top of who your suppliers are and making sure that all your suppliers are real companies.”

Peter Smith also highlights how obtaining the vendor master data record during onboarding plays an absolutely critical role in ensuring that the right suppliers are approved and for establishing solid future relationships. He explains how, in some countries, “there are concerns that suppliers may be a front for organized crime, for instance. They may have directors with a criminal record or they may only have been created as suppliers three weeks ago. That’s a bit of a warning sign.”

Peter goes on to explain how rigorous onboarding provides the foundations for adding further data around supplier performance, sustainability issues, working practices or modern slavery. This underlines how ongoing maintenance of the data is also a key part in navigating a relationship with a supplier.

The role of data in supporting wider initiatives

In the interview, Peter Smith also discusses the importance of collecting the right data in order to support campaigns or initiatives, for example around issues such as human rights, sustainability or diversity.

In one example, Peter explains, “When the UK government started focusing more on encouraging small suppliers – I was involved in that more than ten years ago – we just didn’t have the data. Government departments didn’t know how many of their suppliers were SMEs, and when we talked to the big suppliers like IBM or Rolls Royce, or Capita, they didn’t know either. So it was impossible to track progress on that. That has all increased the requirement for data; and for good data, data that’s kept up-to-date and is meaningful.”

Of course, as a result of the pandemic situation, one initiative that has particularly rocketed up the agenda is supply chain resilience. As Peter points out, “Organizations have become more aware that they need to understand their suppliers, know where manufacturing facilities are, understand maybe the second tier or even the third tier of suppliers for really critical materials, so that they get a view of what the risk profile really looks like and can then focus on mitigating those risks in some way.”

The COVID-19 pandemic represents a unique shock to the system but Peter says that he hopes that data to support supply chain resilience will remain at the top of the agenda, as he adds, “There are more frequent shocks, there are natural disasters, there are earthquakes and floods and tsunamis and you have fires in factories and you have political problems, and they can all affect supply. Yes, risk and resilience and data to support that has gone shooting up the agenda in the last six months. I hope that’s a permanent change, I hope people don’t just forget that in another few months’ time. I don’t think they will, I think it’s changed things forever.”

The right messaging – How to use procurement data

As the procurement department makes a greater contribution to the broader goals of the company, it means that people within Procurement are going to be talking to the board more – but this also means the ability to better articulate the value that Procurement brings to the table is now more urgent than ever.

In the discussion, Peter defines this as being able to relate activities to strategic goals, as he points out, “It’s no good just saying, we’ve done x, or we’ve onboarded 10,000 suppliers into our new system.” He says that a combination of data linked to organizational goals and priorities is the key to making the message resonate. For example, Peter believes that much more impactful is a statement such as, “Do you realize we handle x million invoices a year and we pay out this much money to suppliers..? If only 1% of that was going to the wrong places, it’s x million.”

This interview was conducted as a response to the HICX publication, “Solving the Procurement Data Dilemma,” a comprehensive survey of 100 senior procurement professionals from some of the largest US and Western European manufacturing and CPG businesses, in partnership with Raconteur. Don’t forget to download your full copy to read more.

Solving the Procurement Data Dilemma: The future of technology in Procurement

In the final interview in our series on ‘Solving the Procurement Data Dilemma,’ Gren Manuel speaks to Nic Walden about, what is the future of procurement technology?. Nic leads the procurement executive advisory programme in the UK for consultancy The Hackett Group. In this role Nic works with senior executives from some of the world’s […]

In our second interview in the series on ‘Solving the Procurement Data Dilemma,’ which supports a full survey carried out by HICX and Raconteur on the subject, Gren Manuel speaks to Richard Wilding, OBE. Richard is professor and chair in Supply Chain Strategy at Cranfield University and has had a very distinguished career, both in […]

Solving the Procurement Data Dilemma: How to sell data projects to stakeholders

In this video, which continues our series on the data dilemma in Procurement, I am joined by Scott Taylor, Principal Consultant, MetaMeta Consulting, and a strategic advisor in this area. Scott is best known as The Data Whisperer, which, as he explains is all about ‘calming data down.’