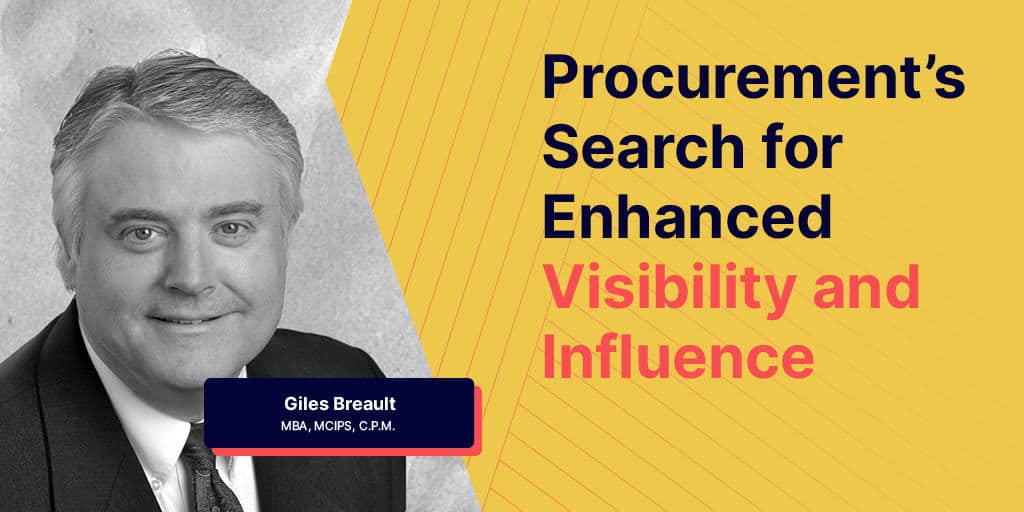 There are many who have argued that Procurement needs a seat at the C-suite table to ensure that data projects and digital transformation initiatives receive the attention that they require for success. However, others argue that Procurement would do better to leverage existing relationships, including that with the CFO and others.

So, we were delighted to welcome Giles Breault, MBA, MCIPS, C.P.M. to the HICX blog to discuss his experiences. Giles is Principal and Founder of The Beyond Group.  He is a Productivity, Supply Chain, Sourcing and Procurement executive with strategic and operational experience in the Pharmaceuticals, Electronics, and Aviation industries.

In this article, Giles gives his advice on what he has seen make the ingredients for success.

“We need a seat at the table, “ my client said as he thumped the table between us during one of our routine project updates.  The comment had so often been said to me by my various CPO clients that I nearly missed it among all the other things we were discussing.  Of course, he was referring to his desire to sit on the management board and thereby be able to effect the important changes that he sorely believed the company needed and which his organization could provide.

I paused for a moment and asked the question why he thought Procurement (specifically the CPO) should hold a seat on the board.  His response was an amalgam of the many reasons I have heard over the years.  In fact, several of the justifications sounded a lot like the same arguments that I used in my career when I, too, thought that I could yield greater influence reporting to more senior levels. They ran something like this:

I respected my client’s perception of what his aspiration would do for him and even agreed on a path forward that might just put him in the role he so desired.  However, later I began to more seriously consider the issue of the CPO reporting level.  From personal experience, I matched up the several CPO roles I have held and then considered in which of those roles was I most successful and in which ones did I have the most influence and ability to set the course for my function and define underlying systems and data structures.

As it turned out, the role in which I reported to the CEO was actually the role where I felt I had the least influence and ability to communicate the importance and needs of the procurement function. Why?  Simple. The CEO had virtually no knowledge of the function, no time to give it but a fraction of his attention, and was completely focused on his main mission of growing the company.  In his words, after yet another discussion on Procurement’s contribution, he said, “Look, I have a 10% revenue growth problem and you are talking to me about a 3% cost problem.  While I think you guys are doing great work, I just don’t have the bandwidth to care.”   Ouch!  Yet, however painful, those words were true.  The procurement contribution just didn’t rank high enough to warrant consistent attention from the most influential person in the organization.

So how does the CPO and procurement function gain greater influence over unruly clients, develop an empowered and sought after talent pool and define the investments that are needed to make procurement processes work? The answer is pretty simple, it’s an inspired boss who cares about Procurement, publicly represents the achievements of Procurement and actively pushes the Procurement “agenda” even when he is well out of earshot of the CPO.

I have had two such roles, one in which I reported to the President of Operations but was responsible for Procurement across all functions and one where I reported to the CFO.  Both of these companies had revenues in excess of €40 billion, and in each of those roles my boss was a tireless advocate of the function.  Wherever he travelled, he questioned the teams about procurement.  He took his counterparts to task, asking and demanding that they too adhere to procurement processes and even become part of the reporting cycle for procurement value results.

We even were able to put the procurement function on the talent development map for future senior leaders. While these bosses were tough to work for, I was able to lead a function that had adequate influence and ability to drive programs quite outside of the CEO’s sphere of direct reports.

But was the success in these roles due solely to a highly motivated boss?  Of course, the answer is no.  So what was the combination of other factors that helped Procurement push its way to higher levels of visibility and respect?  It was the bridges that we were able to build with other functions. In both cases, there was a triumvirate at work that allowed the Procurement Organization to be most effective.  Cooperatively working together, myself, as CPO, the CIO and CFO were able to forge a working relationship that underpinned much of the success of the procurement function and also contributed to the success of all three.

Firstly, the relationship with the CFO allowed for accurate and true bottom line results to be aggregated and ultimately ended with a continuous exchange of high caliber talent.  Secondly,  the relationship with the CIO allowed for Procurement to effectively specify its needs and successfully push for harmonized global systems and data structures.  The effective bonding of all three functions helped build trust relationships that spanned global locations and vastly increased Procurement’s ‘visibility and leverage’

The bottom line of all of this is that reporting lines and the desire to sit on the management board are not necessarily as important as CPOs often claim.  In fact, a motivated boss who helps Procurement build lasting functional relationships probably goes a lot further in supporting procurement teams achieve their goals.

FCPA / Anti-Bribery Compliance: Is your organization ready and able to successfully address a SEC audit?

Facts: A record 735 FCPA enforcement actions were filed in fiscal year 2011 – with over $2.8 billion in associated penalties. (source: SEC) 78% of Global 2000 organizations did not include partners/suppliers in their Code of Conduct practices. (source: Business Ethics Management Group) The FCPA and Anti-Bribery acts consist of two provisions: the anti-bribery provision […]

Five factors to consider for best-of-breed

What should the supply chain and procurement community consider when adopting best-of-breed tech? Here are five key factors by HICX CEO…

Digital Transformation: Procurement & IT Working Together

Procurement and IT share the same high-level corporate objectives, however, their emphasis on how to reach these goals can differ. It means that fostering a culture of mutual understanding and collaboration between these key stakeholders is a vital component for ensuring successful outcomes within digital transformation programs. In this webinar, we join Karthik Rama, who […]