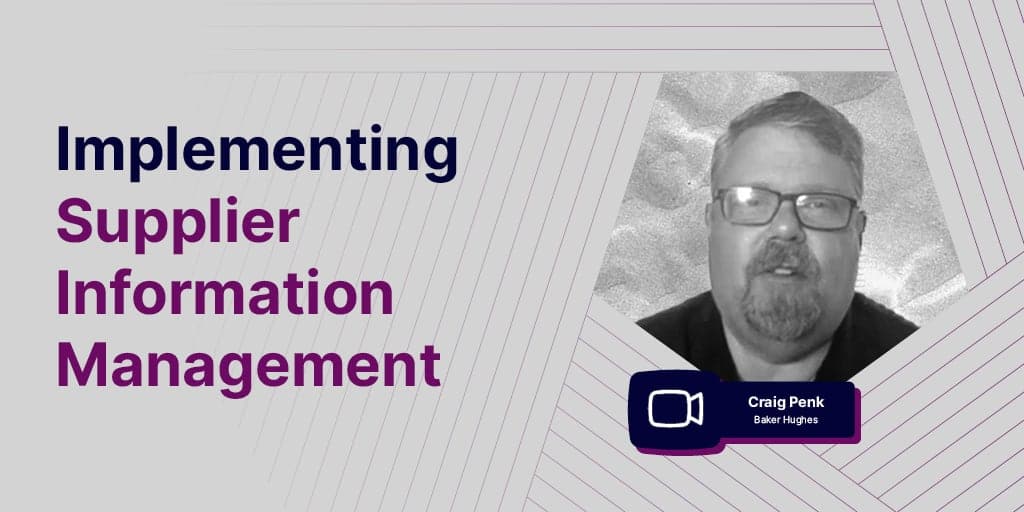 For the second in our series of webinars on End-to-end SIM Strategy, we welcome Craig Penk, Director of Source-to-Pay Centre of Excellence at Baker Hughes, who discusses with us how to implement Supplier Information Management. It follows on from our previous session on building the business case and covers:

Preparing the organization for the implementation of Supplier Information Management

As Craig recounts, the initial context for the use case for Supplier Information Management was, like many large enterprises, born out of a highly complex situation that arose due to the history of the organization, including both a merger with GE and later a subsequent demerger. This left Baker Hughes with a complex environment consisting of at least 15 ERPs, combined with a number of other disparate systems that were bolted on for specific functions, across 120 countries. An added complication was being faced with accelerated timelines due to the need to meet requirements by specific dates to avoid fines for not meeting exit dates mandated by the demerger.

These requirements meant that certain short-cuts needed to be taken, which Craig reveals became lessons learned when it comes to implementing SIM – in particular the need to address supplier master data issues upfront and head on, as he recalls, “We did not really have a meaningful master data clean-up in preparation for implementing some of the workstreams. In this manual environment, where a lot of people were doing things either outsourced or in internal groups that weren’t necessarily aligned, it was very difficult to enforce governance and to see who was doing what and to rationalize that.”

In order to address these points, Baker Hughes conducted a comprehensive series of workshops to document these differences, gather input for the design of the solution and determining how to overlay governance, which resulted in the establishment of a community of super users who were all involved in the process.

It also required a very formalised steering and advisory process with meetings to address progress, reporting and prioritisation. As Craig explains, “It ensures that not only we raise issues under leadership but also that we ensure that we raised consensus.”

He continues, “We had to plan on having the resources available to address gaps or problems. So that was something that needed to be in place – but also the ability to pivot. That’s what’s nice about being in a low-code environment, is to be able to address these mistakes or gaps or errors as we find them without significantly impacting the business.”

In order to achieve successful adoption, Craig highlights the need to ensure that culturally an environment is created where everybody is respected and credibility is gained as the license to operate with the business stakeholders. “I’m a firm believer in that for you to be able to make good strategic decisions you need to know what’s going on at the desk level. So, part of that is building trust and credibility with all of these different business units – and people around the world – and then ensuring that they are heard so they can bring their best every day,” he adds.

“There is an expectation at Baker Hughes that communication is key and that we actually live our values. We’re always taking out a lot of work and dealing with conflicting priorities, but leadership is serious about the values. So, a part of that is to have an honest consensus at all levels of the organization, to make tough decisions, to be blunt and fail fast, to move on and pivot.”

Best practices and learnings from the field

In terms of learnings from the field, Craig mentioned that this really all comes back to the data, as he explains, “I really wish that we had had the luxury of having a data project to clean up our master data, to look at the inconsistencies across our different ERPs and product companies for the configuration of our data points. The other mistake that we made around what our assumptions were for how to structure our master data better.”

To overcome this, Craig has some advice, stressing the importance of “asking the right questions upfront.”

“I think we were focused more on capturing what we had already built-in – and enhancing supplier compliance and automation around that – but we didn’t necessarily ask all the right questions of the many 120+ countries and geographies strategically on how we shouldn’t do this,” he adds.

Craig also advises to ensure that the project is led by the business case but to avoid trying to build in too much complexity on day one, pointing out the often-missed difficulties of change management. “If you’re able to transition to a new platform and build some adoption and not have too many problems, then that’s the license to operate and to further enhance. So, take a look at change in an incremental manner,” he cautions.

Towards the end of the webinar, Craig underlines the benefits of undertaking the project, as he reveals, “We’ve experienced a big improvement for supplier onboarding and extensions compared with our legacy system. So, our legacy system that averaged about 17 days and we’re at a little bit over half of that.” Craig also talks about the benefits of not only improved governance, but also the visibility of that governance and the controls.

In connection with governance, fraud is another area that has seen a positive impact. “In the last few years we had increased cases of attempted fraud. Some successful, most of them unsuccessful, thankfully, but this helps to enforce that governance and mitigate fraudulent activity.”

The positive metrics have enabled Baker Hughes to start focusing on the next 18 months, as Craig explains, one of the next priorities is ‘embedment.’ “The more people use the tool on a daily basis the better that they are going to get at being able to self-serve, and we want to hear from those people to be a conduit of what we could do better and future enhancements.”

In this part of our series of webinars on ‘End-to-End SIM Strategy’, Duncan Clark, Head of Product Marketing at HICX, is joined by Costas Xyloyiannis, CEO at HICX; Adam Hubbard, Supply Chain Governance and Performance Manager at EDF; and Jerry Grable, Director of eBusiness at BAE Systems, Inc. to discuss the value that SIM has brought to […]

An Interview on the Dangers of Dirty Procurement Data

In our latest interview, we welcomed Susan Walsh, otherwise known as The Classification Guru, to talk to us about the dangers of dirty procurement data. Susan is an expert in spend data classification, taxonomies, normalization and steps for ensuring data accuracy. The COAT framework As Susan explains, COAT stands for Consistent, Organized, Accurate and Trustworthy, […]

How To Connect Supplier Data Silos (And Empower New Tech)