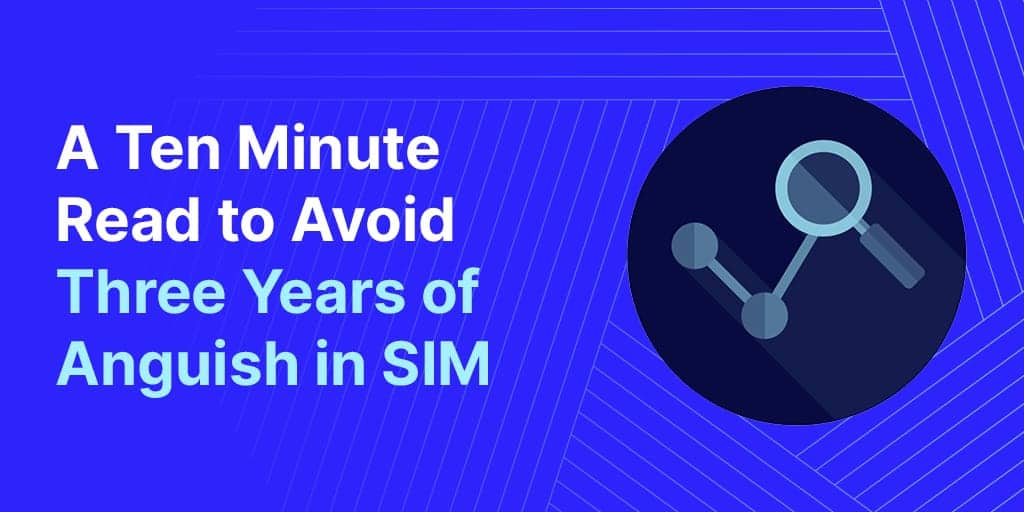 Launching a Digital Transformation Project to include Supplier Information Management

As part of digital transformation initiatives in Procurement, one of the areas that will be very much in scope is that of Supplier Information Management (SIM).

Enterprises looking to deploy a Supplier Information Management solution have a number of options, but all too often choose a route that can lead to up to three years of delay and wasted investment. How does this happen and what could an alternative path look like in comparison?

Having interviewed procurement experts across the industry and documented the typical journey that this takes enterprises on, our analysis found that there were striking similarities in how this has been tackled and the pitfalls that have occurred along the way – challenges that could have been avoided if the obstacles had been considered at the start of the project, rather than being uncovered along the way. Here’s what we found in terms of the perceived risk when the decision was taken, the specific challenges that arose, and how the risk sentiment radically changes as a typical project progresses and the hidden costs begin to stack up.

The typical timeline and journey

The lifetime of the project, before it is rejected in favor of alternatives, generally follows a pattern similar to that detailed below:

Starting on the left of the chart, under Day 1, the first assumption often made is that “SIM seems straightforward.” Indeed, why should it not be? Supplier information is available from transactional systems such as the P2Ps, and P2P suite providers offer Supplier Information Management solutions as part of their package. It is at this point, when the risk sentiment is low, that a confident decision is taken to use the P2P suite for SIM. Furthermore, at this stage, with the upfront cost of implementing a dedicated SIM coming in at a higher amount, the decision seems logical. However, as the timeline above shows, this choice now involves a series of subsequent investments and commits in terms of time and resource from other functions (shown by the green markers in the timeline), in particular IT. These activities trigger a sequence of key ‘learning milestones,’ (shown by the blue markers) that begin to undermine the original ‘low’ risk sentiment, marking a trend that only continues as the journey progresses.

Following data loading and processing – and resultant deficiencies in the data being identified (such as multiple duplications and missing details), organizations find that it would be better at this stage to remove direct suppliers from the scope of the project. The complex relationships with direct suppliers and the need to tie it to other databases, such as inventory, means that the theory of using P2P  for all suppliers does not work in practice. It is a major drawback so early on in a project that was intended to provide 100% insight into all suppliers. To have to remove so much from the scope comes as a huge blow.

Also, the data deficiencies will further uncover a need to initiate some programs of data cleansing in order for the wider project to have any chance of success. While it feels like this is a suitable answer to the issues (combined with the additional chance to fix rogue data), it adds cost and fails to address the issues that have caused bad data to be in circulation – in fact, those issues remain and new bad data will be added on a daily basis. The sentiment bar at the top of the charts shows that the perception of risk has certainly increased now, although the hope is that, a few data cleansing exercises aside, the overall integrity of the project will remain intact.

Still, by the end of Phase 1, the general experience is that the deadline for a single version of data to be achieved will have passed with that being unmet – and the original target end date for the project will have to be revised. Now that the extent of the data issues are known, and to set expectations, this will likely be pushed out by around twelve months or so – in order to allow room for any further unexpected ‘discoveries’ along the way.

Unfortunately, there are typically at least three or four more instances of ‘unexpected discoveries,’ as we head into Phase 2.

As Phase 2 unfolds, with investment and resources already spent – and more still having been secured – the momentum of the project takes over and it is difficult to back peddle at this point. Furthermore, there is a perception still that, although risk has increased, the implementation of automated workflows and the end goal of a self-service supplier portal will help to ease the pain felt in Phase 1.

It is usually during this stage that the reality of establishing automated workflows – how effective they are (or are not) – starts to become apparent. The next ‘unexpected discovery’ is that further data integrations are required to work around some of the complexities of handling supplier data and that middleware is needed for the data integrations to work. This can come to many as a surprise, especially if the expectation was that a single vendor environment would mean that this would not be a cost to include. Again, resources from across the enterprise have been used and significant investment already made, such that this new cost has to be absorbed and will hopefully make sense in the longer term.

Still, it is likely that during this phase, many of the manual processes have not been replaced and that only a limited self-service supplier portal may have been launched. The risk sentiment is heightening to amber – and the chart shows how the cumulative investment in the project has already begun to climb quite steeply at this stage.

Most realize after twelve to fifteen months of this process that promises made in the original business plan for the project are likely to be out of reach. Having to settle with a less than adequate supplier portal (and now with a messy mix of part-automated, part-manual processes), the quality of the data continues to be an issue.

At this point, expectations may once again be redrawn. Upon realizing that risk and compliance data remain unavailable and with the new (second) target date for completion fast approaching, the viability of extracting this insight is put under review and potentially removed from scope – for now.

The scenario also means that the expected data governance frameworks cannot be put into place as first envisaged and, while the costs continue to rise, the real challenges of using transactional data as part of a Master Data Management (MDM) are becoming readily apparent.

Digital transformation is still a worthy enough end-goal, but the progress is so far from satisfactory that what appeared as a low-risk, easy solution has significant risk attached to it.

Phase 4: Deciding when to call time

At this stage, and with lengthy delays already having been experienced since the previous data cleansing exercise, the data is likely to need further cleansing to help make it fit for purpose. It is highly likely that our efforts from the previous data cleansing process have been wiped out by the day-to-day need for the enterprise to continue processing data to allow transactions and other functions to continue.

The reality is that the project will be subject to another round of re-scoping (read: de-scoping), while the costs continue to rise. Decisions will have to be taken about whether it is worth continuing further investment in attempting to automate processes to integrate the data into the ERP(s) – and while the fall-out of this takes place, the project can be deemed as ‘significantly overrunning,’ with costs mounting – as the cost comparison analysis on the show charts.

The real decision at this point, is how long to continue on this trajectory or when to swap the approach in favor of the dedicated SIM solution. The only saving that can be made at this stage is that from unnecessary delay. It is at this point, with the risk sentiment now firmly in the red, that enterprises are very open to discussing dedicated Supplier Information Management solutions.

This is a shame, as it is unnecessary. As the chart shows, the earlier that a new approach is chosen, the more that is saved – and every month of delay counts.

Supplier Information Management solutions: What options should you evaluate?

As part of digital transformation initiatives in Procurement, one of the areas that will be very much in scope is that of Supplier Information Management, or SIM. Supplier information management describes a framework or governance structure for collecting and validating all data relating to the onboarding of suppliers and for the maintenance of that data during the relationship with the supplier, and beyond.